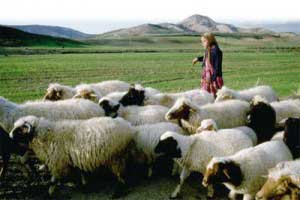 I could just hug all the people who have sent in stories about moving farm animals. When webmaster Dave Smith urged me to write a blog, I had no idea that through it I would discover so many kindred souls. Writing has never been this much fun before.

I wonder how many of you are aware that although your adventures with hauling animals may be amusing or even pathetic at times, they are also a continuation of one of human culture’s central themes. Humans have been driving animals by every conceivable method available for as long as food has had to be moved from producer to consumer. That goes back at least to those shepherds on the hills above Bethlehem. Our whole “western” epic, based on our once popular icon, the cowboy, is an outgrowth of our essential need to drive animals from point A to point B. There used to be quite a successful magazine called “The Drover’s Journal.” The cowboy did not start in Texas and Kansas and the Great Plains as we are inclined to think, but in the East. It is an epic for all of America and before that all of Europe and Asia too. Dave Harpster, whose tombstone I pass every time I go to town, was an authentic eastern cowboy, riding a horse and driving cattle and sheep hundreds of miles from the nearby village named after him to Baltimore, Philadelphia, Pittsburg and Cleveland. We might think today that moving a goat in a station wagon is preposterous, but there were far stranger strategies in those bygone days. Sometimes the drovers stitched their pigs’ eyes shut because it was easier to move them blind down the trail. (I go into all this is a big way playing cultural historian in “The Mother of All Arts” in case you want to take a look deeper into this part of our history.) The bottom line is that all of us trying to recreate a thriving pastoral garden society today are really carrying on an ancient tradition. That’s why the lonesome cowboy is central to American culture and the good shepherd is central to Christian religion. As hilarious as our escapades sometimes are, we are paying homage to an elemental activity of human survival.

One of my fondest early memories is not only “playing cowboy” with my siblings on our pasture hills and singing those “western” songs I still love, but actually driving animals overland as in the days of yore. Every summer for awhile, we would drive our sheep from our pastures to another of my Grandfather Rall’s farms. Mostly because I was steeped in the kind of cowboy lore put forth in movies, this was the most exciting event of the year. We drove the sheep down our country road to the highway, and on a couple of miles to another country road. The whole distance was about four miles but it seemed like all the way from Abilene to Fort Dodge to me. It was easy to drive the sheep along that route because the roads were all flanked by fences in those days. Neighbors were informed ahead of time and they would stand along the road in front of their homes to make sure the sheep did not swerve into their yards. But the sheep, headed by old ewes familiar with previous drives, knew where they were expected to go most of the time. Traffic on the highway was sparse in those days and those who traveled it were almost all sons and daughters of our rural lifestyle and obligingly stopped until the flock had passed—or even helped with the driving.

I was always Gene Autry or Roy Rogers in my mind. And I didn’t even know that these actors were more than fancy Dans in the brocaded shirts of the Hollywood cowboy. Roy Rogers actually grew up and worked on farms in southern Ohio. What was more ironic is that even as I walked or trotted behind our sheep on the annual drive, I had no idea that less than half a mile away from the roadside trail, a real cowboy, Dave Harpster, lay buried.

And now I’m thinking, as I drive my sheep from one rotational pasture to another, that if we can pay attention to the new direction the real economy is taking us, we just might unbury old Dave into a new kind of cowboy culture that won’t be so lonesome.
~~

The picture of Roy and Trigger was a nice touch. In the math classes I teach, I always make sure that my students know the difference between the double bar R (the symbol for all real numbers) and the Double R Bar (the brand of the greatest cowboy that ever lived). It takes some explaining since many of the younger generation lack cowboy literacy.
Your reference to Dave Harpster piqued my interest and a google search was informative – interesting character. The 1884 bio that was referenced stated that he was a staunch Republican. It also said,I think, that he laid out the town of Fowler in honor of his friend C R Fowler. Part of his bio identified him as a lifelong Democrat. I found some encouragement in their friendship.
Sewing pig’s eyes shut strikes me as a solution more difficult to implement than the original problem. Thanks for the post.

Really, if you go even furher back, we have probably been following the herds since humans started to walk upright! At the least, people have been droving since the earliest days as nomads. They knew the animals couldn’t stay in the same area for a long time; not only did the food supply diminish but parasites and polluted water could become problems. Even for those who had to some degree settled in an area, there were summer pastures and winter pastures. Think of the Mongols,the Scythians, the Cheyenne, the Bedouins, traveling miles upon miles with their flocks and herds. Amazing, isn’t it, that so-called illerate, unwashed, untutored “savages” could be so knowledgeable about the complexities of the land? Makes you wonder sometimes if what we’ve gained in scientific learning makes up for that detailed experiential learning intrinsic to the “pastoral life”. And more, whether the real decline and fall of civilization began when people decided they wanted to stay put in cities. Gene, consider yourself hugged back for the wonderful writing which I have enjoyed for over thirty years! Please keep writing as long as you can strike a key or wield a pen (or in case of real civil decline–a quill!).

After reading your books and your accounts of your childhood, I really envy people like you, and also the folks who have written in about their (often funny) experiences with moving livestock. I grew up as a middle-class child, son of a corporate engineer. I loved playing cowboy and indians (though I was prone to take the part of the Indian – I’ve always been a little on the wild side). We’ve had dogs and cats over the years who I’ve greatly loved and enjoyed. But never livestock.

I retired about 5 years ago and have been building up my gardens and this weekend I’m taking a really big step: baby chicks are arriving. I’ve read a bunch of books and Acres USA, etc. but I still “don’t know nuthin'”. But at least maybe I can enter the farming culture sideways thru my gardens and chicken raising. And who knows, perhaps next year we may try goats?

I’m determined to make it another 20-30 years so that I can get ever more deeply into this land-based culture. I go around nowadays identifying myself as a “peasant farmer” – strikes me as a proud identifier, no matter what my city friends may think. Keep up your good work.